Arthur Mason DuBois (1890-1979) was the grandson of Catherine Helena (Jay) DuBois, a granddaughter of John Jay. DuBois served in the American Expeditionary Forces (AEF) as a 1st Lieutenant, and was eventually promoted to Captain during World War I. Like many of the Jay descendants, service to his country was never a question but rather an honorable responsibility passed down through generations.

DuBois joined the army in 1917, the same year that the US joined the war. Throughout the course of the war the number of men that served under DuBois increased from 12 to 28, due to his increase in rank. He was first assigned to run the Aviation Clearance Office in the port city of St. Nazaire. The Aviation Clearance Office was a part of a new division in the United States Armed Forces – the Aviation Section of the Signal Corps. The Signal Corps, during this time, was tasked with utilizing new technologies. Since planes were relatively new (invented in 1903), they were given to the Signal Corps. Due to the desire for aviation to have its own section in the US military, a subsection of the Signal Corps was created known as the Aviation Section. This department focused solely on aerial operations and concentrated on reconnaissance and security of aerial supremacy. They were also tasked with the construction and repair of planes. DuBois’s job was to receive these parts and have them installed into new planes. DuBois would carry out this task in St. Nazaire, France, in the administrative region of Pays de la Loire, on the Loire river. His  station was the staging point for unloading supplies and a receiving portal for US reinforcements who were also a part of the American Expeditionary Forces.

How did these sectors work? Supplies would come from America and be dropped off in one of the Base Sections. The Base Sections would then transport the newly acquired supplies to the Intermediate Section where they would be stored. When the front lines needed supplies, the Advance Section would obtain supplies from the Intermediate Section, then ship them to the front lines where they would be distributed accordingly.

On November 11th 1918 the armistice was signed, which signaled  the end of the war. In order for the troops stationed at St. Nazaire to stay in touch after the war, they formed an association led by Brigadier General Samuel D. Rockenbach who wrote a book about his service in the American Expeditionary Forces Tank Corps during World War I. A few of the men in the association, including Arthur DuBois, felt that there should be a monument representing everyone that served at St. Nazaire during World War I. Due to this, a committee was formed by the people who were in favor of the monument. It would cost around $100,000 to fund this project. This committee was called the Saint Nazaire Memorial Fund, led by Major Roynon Cholmeley-Jones.

The memorial was constructed by sculptress Gertrude Vanderbilt Whitney in 1924. She was renowned for her works that are located all across the United States, some of which were also memorials for troops who served in World War I. Sadly, during the 1940’s the memorial was destroyed by the Third Reich. Under German occupation, St. Nazaire became a headquarters for the Kriegsmarine and was raided by the Allies in 1942. After the war was won, St. Nazaire returned to French control. The memorial lay in ruins until it was rebuilt in 1989.

Arthur DuBois lived through an interesting time; he fought in World War 1 as a Lieutenant then Captain, lived during World War II, and experienced the Cold War. He died in New York in December, 1979 at the age of 89 and was buried at The Jay Cemetery. In the end, the legacy of Arthur DuBois and all of the other men who served in St. Nazaire lives on through the memorial envisioned by Gertrude Vanderbilt Whitney. The patriotic contributions of DuBois, his Jay relatives and his descendants are many and preserved at the Jay Heritage Center through volunteer research projects like this one. 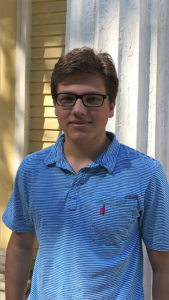 My name is Anthony Castellano, I am 16 years old and I am a rising Junior at Harrison High School. I have always loved history for as long as I can remember, specifically World War 1 and World War 2 due to their rich histories.  I also really like science as well and I am a member of my school’s Astronomy and Chemistry clubs. Outside of school, some of the things I enjoy doing in my free time are playing with my dog, Maverick, hanging out with friends, listening to 70’s and 80’s music, and volunteering for various causes. I have spent many years volunteering, but this so far has been one of my favorite projects because it has combined two things I am passionate about – history and giving back to my community. Working at the Jay Heritage Center has made it even more apparent to me that I want to pursue a degree in History when I go off to college.

This blog is my first piece working for the Jay Heritage Center. I have thoroughly enjoyed working here because of the amazing people and the awesome environment. I have had a great time at the Jay Estate and plan to continue working here in the coming year.