While the Jay family’s ancestral home in Rye was not deeded to Peter Augustus Jay until September of 1822, Peter and his family were already spending many of their summers at the country residence by 1814.  We have considerable insight into their household activities through the account book of Peter’s wife, Mary Rutherfurd. (Learn more about the ledger here.)

Mary often hosted dinner parties and events both at home in New York City and here in Rye. Her entries detail numerous market purchases for the guests – items range from gooseberries to macaroons to calve’s head. In a letter to her first cousin, Mary seems eager to entertain her relatives, writing that she “could make [her aunt’s] time pass very agreeably for a fortnight at least” (Memorials of Peter A. Jay, 117).

In the same letter, she continues to describe her management of the household affairs in Rye and the popularity of the estate.  Mary reveals: “I do not find housekeeping half the trouble that it was in New York, although we have dined but three times alone since we came here, and several times in large number” (Memorials, 118). She elaborates that parties were sometimes filled with “twenty and twenty-two” guests (Memorials, 118).

One possible visitor during this period was Matthew Clarkson, younger brother of Mary Rutherfurd.  She may have also hosted her parents, Sarah Cornell and Matthew Clarkson; Mary’s father was a Revolutionary War military officer who served with Washington and Jay. 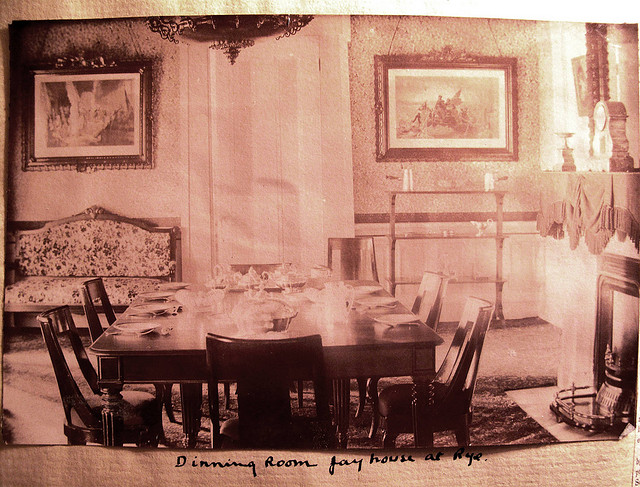 Turning the pages of the account book, we can imagine the Jay and Clarkson clans enjoying an evening at the dining room table for a holiday, special event, or habitual family dinner.  Considering Mary’s grocery list, the party could have been savoring huckleberry biscuits or tasting french vegetable soup, both established recipes at that time.

Whatever the meal or the occasion, it is evident that Mary Clarkson Jay was a cordial entertainer.  The Jay Estate was frequented by prominent house guests including Samuel Morse and James Fenimore Cooper, both of whom felt welcomed by Mary’s warm hospitality.